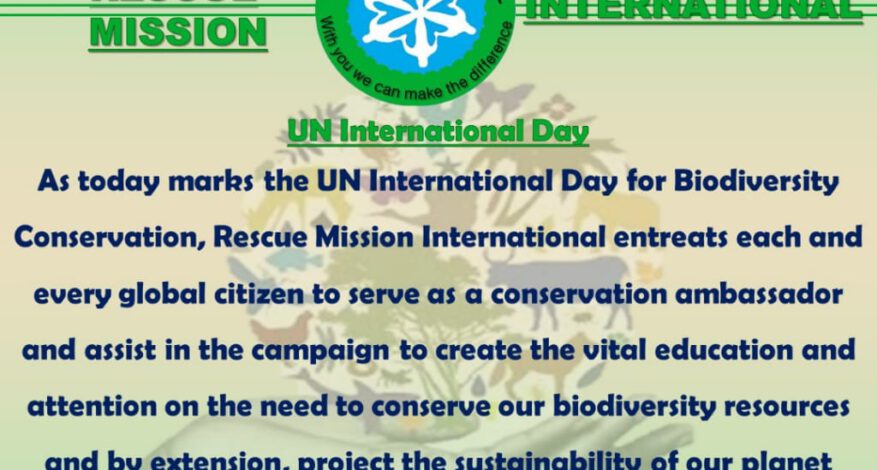 In December 2000, the UN General Assembly adopted 22 May as IDB, to commemorate the adoption of the text of the Convention on 22 May 1992 by the Nairobi Final Act of the Conference for the Adoption of the Agreed Text of the Convention on Biological Diversity. This was partly done because it was difficult for many countries to plan and carry out suitable celebrations for the date of 29 December, given the number of holidays that coincide around that time of year.

Rescue Mission International as a global Environmental Protection/Sustainability Youth-led organization is glad to join countries and other international and national Environmental sensitive Organizations, especially the youth-led organizations to observe the UN International Day for Biological Diversity. This day was proposed by the international community to draw our attention as a people to the need to conserve our biologically diversified resources that have been graciously given us and on which our very survival hinges. This, therefore, encourages us all as global citizens to contribute to the protection of our flora and fauna. Today, just like all other 22nd Mays we have had since December, 2000, is International Day for Biological Diversity and the global theme for today’s celebration is “Our Solutions are in Nature.”

The theme shows that, our natural fauna and flora are and will remain the answer to if not all, but almost all the sustainable development challenges we are all faced with as a people. From nature-based solutions to climate change and its repercussions to food and water security, and sustainable livelihoods, biological diversity remains our basis for a sustained future.

As an organization headquartered here in Ghana, we cannot celebrate this special day without adding our voice strongly to the numerous calls by other organizations on the current Ghanaian government to please preserve and conserve the Atewa Forest Reserve in the Eastern part of the country. The Atewa Forest Reserve covers an area of 23,663ha, in the Eastern Region of Ghana. The forest reserve is blessed with distinctive upland forest vegetation, which is rich with a number of very rare species. The Atewa Forest Reserve is more or less an undisturbed natural vegetation, a rare phenomenon in West Africa, and one of the very few in Africa. This reserve has numerous fauna species, some of which are native or confined in only this reserve. The reserve is equally blessed with a wide variety of natural habitats such as streams, swamps, closed forest and natural clearings, which support a rich variety of fauna such as Killfish (Epiplatys chaperi) and Walker’s barb (Barbus walkeri), which have great potentials in the aquarium trade.

The distinguishing trait of the Atewa is further supported by the fact that it is one of 34 Global Biodiversity Hotspots and one of Ghana’s Globally Significant Biodiversity Areas (GSBAs). Atewa is an internationally important reserve, since the range provides the headwaters of three river systems – Ayensu, Densu and Birim rivers; which together serve as the source of domestic and industrial water for local communities within its catchment areas as well as water for millions in the National capital, Accra.

It is on this important note that, we reiterate our stringent position of conserving this global hotspot, and also encourage the President, His Excellency Nana Akufo Addo to fully and actively involve the relevant stakeholders including indigenous and local communities, youth, Environmental NGOs and the business community in the conservation of the forests of Atewa. We would also want to remind him that, he has the opportunity to be remembered by our generation and generations yet to come as either the president who destroyed our beautiful reserve or as one who conserved it! The choice lies in his hands.

Finally, Rescue Mission International entreats each and every Ghanaian youth to serve as a conservation ambassador and assist in the campaign to create the vital education and attention on the need to conserve our biodiversity resources and by extension, project the sustainability of our planet earth.